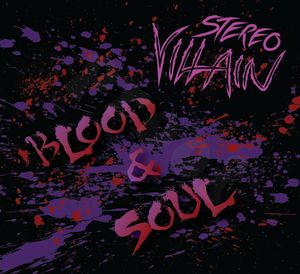 Stereo Villain based in St Albert, Alberta, Canada. They  have been compared to Blink 182, Green Day, Hinder, Bon Jovi, Faith No More and many more. They just want to rock, take over your stereo, ears and mind. Prepare for your soul to be villainized. Stereo Villain's  new single "Blood & Soul" featured Sunday July 24, 2022 at 5:40pm on Edmonton's 100.3 The Bear Radio and it is Available for FREE download on this site. Purchase our full Ep Blood & Soul today on Apple Music.

Click here to see photos from our cd release party!!

Well peeps, It has been way too long, Vic has been touring around paying tribute to the King of Rock n Roll before and after the Pandemic. Now we are back to creating some new music and sound recordings for your ear digesting pleasure. In addition  we are  setting up shows so you can see us rocking and rolling with a more raw and organic sound. Stereo Villain once a 4 piece is now rocking it out as a Trio. Keep an eye out for upcoming shows coming near you.

Lots going on with Stereo Villain folks. Late last year Stereo Villain, appeared in a movie "Q4 Dream Corporation" starring Michael Madsen from Resevoir Dogs and Eric Roberts from The Dark knight. The movie is directed by Tim McKort due to be released any day now. Doing alot of writing and rehearsing. Check out our shows page for upcoming performances this month.

Stereo Villain was in the studio  working with producer Nick Blagona and Engineer/producer Phil Anderson of Powersound Studios in Edmonton. We have no doubt you will love the new tunes on our soon to be released Ep "Blood & Soul". You can expect to hear all 5 songs in July 2015. The first single " Stiletto" is available here e and now for .99 cents and soon on i-tunes. We urge you to share it with all your friends! Make them all part of the SV Familia(said in an Italian accent).